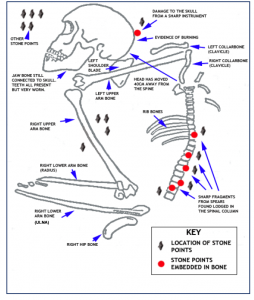 Workmen digging a ditch under a bus shelter at Narrabeen on Sydney’s northern beaches in January 2005 found the skull and skeleton of a tall Aboriginal man.

He had one wound in his left hip and two through his back, inflicted by stone tipped spears. The tip of a stone barb was still embedded in his spine. An axe wound in his skull is thought to be the coup de grace that proved fatal in his final agonising moments.

This is the first archaeological evidence for death by spearing in Australia. Based on similar revenge battles in the Sydney area in the eighteenth century this was a ritual spearing. The stone-barbed killing spear resembles one used by the Bidjigal warrior Pemulwuy to spear Governor Phillip’s game-shooter John McEntire in December 1790.

Narrabeen Man was 183 centimetres tall and between 30 to 40 years old. Radio carbon dating of bone samples sent to Lawrence Livermore National Laboratory in California dated the skeleton to about 3677 years before the present (BP). An analysis of the isotope chemistry of the man’s bones revealed that he lived on a diet of fish, shellfish, seaweed and sea birds.

Narrabeen Man had not lost a front tooth, noted as a crucial part of Aboriginal initiation rites in the Sydney coastal area. The practice, called ‘tooth evulsion’, can be dated to 8000 years BP, but might not have reached the eastern coast by 3700 BP.

Teeth were not removed in the differing inland culture at the Hawkesbury River, where in 1791 Governor Arthur Phillip encountered two garradigan or ‘doctors of renown’ whose teeth were intact. When questioned, the Aboriginal guides Colebee (a Gadigal from Sydney’s eastern suburbs) and Ballooderry (a Burramattagal from the Parramatta area), whose teeth had been knocked out at initiation, refused to ask why and dropped the subject.

It’s worth pointing out that the skeletal remains of an Aboriginal man was found in June 1945 in Ocean Street, Narrabeen by two boys who had been cycling, as reported in The Sydney Morning Herald (18 June 1945, page 3).

Police believed the skeleton had been uncovered by recent rains. A dentist who examined the teeth said it was that of an Aboriginal man aged 35 to 70 years old.

‘Narrabeen Man’ was found in 2005 at the bus shelter at the corner of Ocean and Octavia Street, Narrabeen. 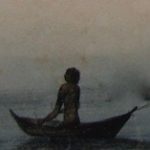 Even before they could walk, Aboriginal children sat in canoes, clasped between their mothers’ knees and crossed ankles as they fished, the way in which, wrote Surgeon John White in July 1788, ‘they always carried their infants’.

Women and children sang while they fished, and laughed and joked with each other. Men and women skimmed across the water in their fragile bark canoes.

Saltwater, as much as the land, was the natural habitat of the Indigenous people of the Sydney coastal area, who called themselves Eora (‘people’).

The harbours, rivers, creeks and lagoons, sandy beaches and muddy estuaries were their natural highways and principal sources of fish and shellfish.

Although they burned and maintained pathways through the bush, the waters of the harbour of Port Jackson, Botany Bay to the south and the Parramatta River running  to the west were crowded with men, women and children coming and going by canoe. Long after the occupation of their land in 1788, Sydney’s Aboriginal clans had not relinquished these waterways, which were their true highways.

Their canoes (nawi) were about three to four metres long and about one metre in width, shallow and shaped from a straight sheet of bark bunched at each end and tied with cord or vines. Spacer sticks were jammed across the centre to hold the sides apart in tension.

Bark for canoes was taken from the stringybark (Eucalyptus obliqua) or from the goomun or ‘fir tree’ (Casuarina species).

Royal Navy Lieutenant William Bradley, who saw Aboriginal men making canoes and shields, noted that that they used a stone wedge to prise off the tree bark, with ‘a junk [chunk] of wood for a Mallet or Maul … they cut the bark round to the length they want & enter the wedges leaving it in that state sometime before they take it off altogether’.

Using prepared bark shaped over a fire, a nawi could be made in a day. The highest part of the canoe was seldom more than 15 centimetres above the water, yet the Eora skilfully navigated these simple craft.

‘They were by far the worst Canoes I ever saw or heard of ’, wrote Bradley, while admitting that they were paddled through heavy surf without overturning or taking in water. ‘Four or five people will go, in the small things, with all their Spears & Emplements for procuring their subsistence’, observed John Gardiner of HMS Gorgon.

Aboriginal women fished from canoes using handlines with shell lures. ‘In general, we observe the canoe occupied by the Women who fish with hook & line, which I never noticed any of the men to use’, wrote Bradley in October 1788.

Men usually caught fish in shallow water or from the rocks with a mooting, a long spear headed with three or four prongs, called a fizgig by the English.

The combination of these techniques, together with net fishing, yielded a wide variety of species. 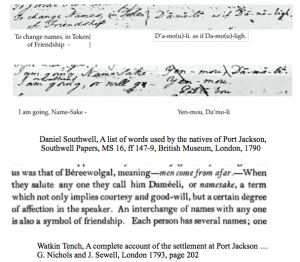 As part of a long tradition of reciprocity and kinship, Indigenous individuals in the Sydney area exchanged names, forging a relationship very much like the present Australian notion of a ‘best mate’.

Sharing the same name established a bond of friendship and mutual aid between the namesakes, even those from different clans.

In the language spoken by the Eora, as understood by those who compiled the word lists and language notebooks, wea-je-minga and weeang meant ‘relating to giving anything’, a word very close to wyanga or mother.

Damuna meant exchange and damoly or tamooly was the act of exchanging a name with a friend. The person with whom you exchanged your name (and in some Aboriginal societies therefore became your trading partner) was your damelian (feminine damelabillia) or namesake. On the other hand, the pejorative term damunalung, someone who refused to give, was put into English by marine lieutenant William Dawes as ‘a churl’, which meant a surly or unfriendly person.

An entry in the Anonymous ‘Vocabulary of N.S. Wales in the Neighbourhood of Sydney’ (MS 41645 (c), School of Oriental and African Studies, London, 1791:23.9), kept by Governor Arthur Phillip and his aides, gives Da-me-la-bil-lie as ‘a name sake, or a person with whom the name has been exchanged’. (I call this wordlist The Governor’s Vocabulary.) ‘An interchange of names with anyone is also a symbol of friendship,’ wrote Captain Watkin Tench.

This practice was widespread. In some places in northern Australia, at the Daly River and at Port Keats for example, persons who had the same name could not talk to each other until they had ceremonially exchanged goods.

There are several examples of Eora name exchanges. Nanbarry, nephew of the Gadigal leader Colebee, exchanged names with Ballooderry, a Burramattagal (from Parramatta). ‘His name is Nanbarry, Bolderry Brockenbau. he is always called Nanbarry’, wrote Newton Fowell, who died that year, in his last letter to his father on 31 July 1790. When Ballooderry died in December 1791, Nanbarry gave up his own name for a period and took the name Bo-rahng (possibly meaning ‘shadow’).

Colebee exchanged names with Warungin, Wangubílye Kolbi from the Gweagal (Fire Clan) based on the south side of Kamay (Botany Bay), brother of Bennelong’s third wife Kurúbarabúla (Two Firesticks). Referring to Colebee, David Collins (1798) remarked  ‘… the natives themselves, when distinguishing between this man and another of the same name at Botany Bay, always styled him Cad-i Cole-be; Cad-i being the name of his district …’

In turn, the English officers called Warungin ‘Botany Bay Colebee’ to distinguish him from the Gadigal leader. ‘Warangan’ in the Dharawal language meant ‘Boomerang’, as recorded in several instances by linguist RH Mathews.

Daringa, sister of Moorooberra or Moorooboora from the Muru ora dial (gal or clan) at today’s Long Bay and Maroubra, exchanged names with Bennelong’s second wife Barangaroo. When Barangaroo Daringa died in 1791, Daringa Barangaroo, Colebee’s wife, lost both her names and was called Bo-rahng-a-leon – so did a little girl living in the Sydney settlement who Barangaroo used to call by her own name. Daringa died the following year.

Woollarawarre Bennelong, as I wrote in my book Bennelong: The coming in of the Eora (Kangaroo Press 2001, page 42), no longer in print, attempted to find a place for Governor Phillip and his officers in the traditional kinship of his people.

‘He calls the Governor Beanga (Father) and names himself Doorow (Son) and calls the Judge [David Collins] and Commissary Babunna (Brother).’ Of his own five names he prefers Woollarawarre and ‘as a mark of affection and respect to the governor, he conferred on him the name of Wolarawaree … adopting to himself the name of governor’, wrote Tench.