‘She belonged to the tribe of Cameragal, and rarely came among us’, wrote Marine Captain Watkin Tench, who romanticised an Eora woman named Gonyara, whom he called Gooreedeeana. Tench’s fulsome description of her charms occurs in his A complete account of the settlement at Port Jackson, in New South Wales … published in London by G. Nicol and J. Sewell in 1793 (pages  180-182).

Gooreedeeana must have resembled the engraving of a Gamaragaliang (a young woman from the north shore Gamaragal), based on an original sketch made in Sydney in 1802 by the superb French artist Nicolas-Martin Petit. Tench measured her height as five feet and three quarter inches.

One day, however, she entered my house, to complain of hunger. She excelled in beauty all their females I ever saw : her age about eighteen : the firmness, the symmetry, and the luxuriancy of her bosom, might have tempted painting to copy its charms : her mouth was small ; and her teeth, though exposed to all the destructive purposes to which they apply them , were white, sound, and unbroken.—

Her countenance, though marked by some of the characteristics of her native land, was distinguished by a softness and sensibility, unequalled in the rest of her countrywomen : and I was willing to believe, that these traits indicated the disposition of her mind.

I had never before seen this elegant timid female, of whom I had often heard ; but the interest I took in her, led me to question her about her husband and family. She answered me by repeating a name, which I have now forgotten ; and told me she had no children.

Concerned that Gooreedeeana might be the victim of her husband’s violence Tench examined her head and was saddened by the result.

With grief I found it covered by contusions, and mangled by scars. The poor creature, grown by this time more confident, from perceiving that I pitied her, pointed out a wound just above her left knee, which she told me was received from a spear, thrown at her by a man, who had lately dragged her by force from her home, to gratify his lust.

Tench saw that the leg wound made her limp and ‘when she took her leave, I gave her … all the bread and salt pork which my little stock afforded’.

When an Indian is provoked by a woman, he either spears her, or knocks her down on the spot: on this occasion he always strikes on the head, using indiscriminately a hatchet, a club, or any other weapon, which may chance to be in his hand. The heads of the women are always consequently seen in the state which I found that of Gooreedeeana.

The name of her attacker, Bigun or Bigon, is found in an entry about ‘Kóinyéra’ (Gooreedeeana) in the second language notebook compiled by Tench’s colleague Lieutenant William Dawes (Book B 1791: 33.3).

Dawes does not translate the sentence. However, the English meaning of yanga is given in First Feet vocabularies as ‘copulation’. Digitised versions of the notebooks, now in the School of Oriental and African Studies at the University of London,  are online at http://www.williamdawes.org/

As an outsider who could never understand their lives, Watkin Tench was ambivalent in his attitude to the Indigenous people he met. He was curious about them, drawn, for example to Arabanoo, the first man captured by the British in 1789, even to scrubbing his captive to find the colour of his skin.

Tench was an astute observer who chronicled what he saw and much he gleaned from other First Fleet officers about Aboriginal culture. He sympathetically praised their intelligence and knowledge of the natural world and was horrified by the smallpox that killed so many Aboriginal men, women and children in mid 1789.

Tench regarded Aboriginal women as victims, treated by their men ‘with savage barbarity’. He wrote ( 1793, page 200) of the Gadigal leader:

Colebee, who was certainly in other respects, a good tempered merry fellow, made no scruple of treating Daringa, who was a gentle creature, thus [i.e. violently].
Baneelon did the same to Barangaroo; but she was a scold, and a vixen, and nobody pitied her.

The well-educated Tench was motivated by his British sense of superiority and culture. He had stories to tell and books to write about the ‘savages’ at Port Jackson that had been contracted with publishers before he left Britain.

His attitude is thoroughly examined by Isabelle Merle in ‘Watkin Tench’s Fieldwork: The Journal of an Ethnographer in Port Jackson, 1788-1791’, in Oceanic Encounters, ANU E Press, Canberra 1961.

Tench was in a boat near the Heads of Sydney Harbour when he next saw Gooreedeeana, this time in a nawi (canoe) with other women, ‘painted for a ball, with broad stripes of white earth, from head to foot; so that she no longer looked like the same Gooreedeeana’.

‘But perhaps’, Inga Clendinnen proposed in her remarkable book Dancing with Strangers (Text, Melbourne, 2003), ‘she visited his waking dreams and made his exile easier to bear.’

Gooreedeeana is referred to simply as ‘Gony-ar-a in the vocabulary kept by Governor Arthur Phillip and his aides which identifies her as a member of the Birra -birragul-leon, an Eora clan located near the Birra Birra reef on the north shore, now called the ‘Sow and Pigs’ and possibly a sub-group of the Gamaragal. 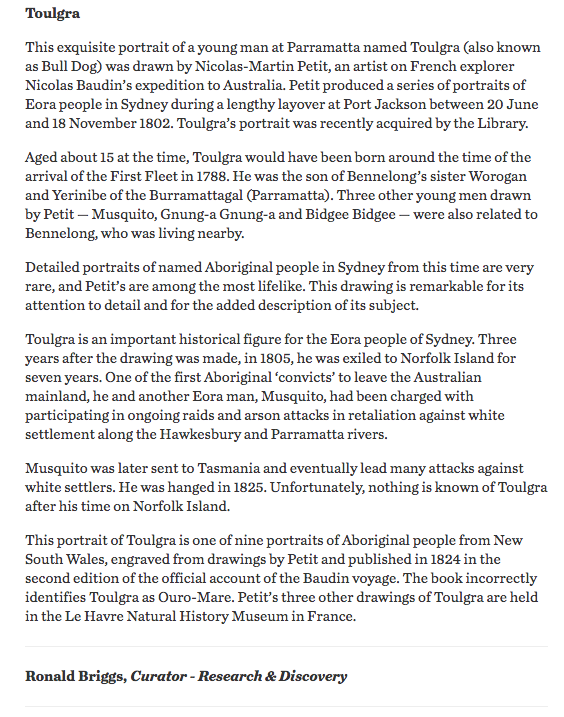