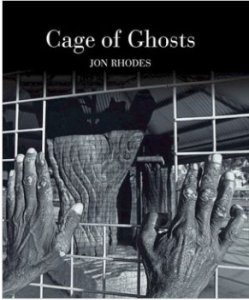 The majority of figures are … probably drawn by eye, and exhibit a considerable amount of ability, being either true to nature, or to some adopted design of a deity or spirit.
William Dugald Campbell, Government Surveyor,
Aboriginal Carvings of Port Jackson and Broken Bay, 1899

Aboriginal culture and spiritual life is most often revealed through history, anthropology and archaeology. In this inspirational book we learn through art and artefacts that survive in the landscape, principally engravings in sandstone, cave paintings and carved and scarred trees.

It is a novel and rewarding approach.

In Cage of Ghosts Jon Rhodes, highly regarded as a photographer, captures, connects and interprets the timeless Indigenous presence through his own eyes, his camera lens and in stories about the pioneer surveyors, anthropologists and historians who obsessively recorded these sites.

It is meticulously researched and compiled, with relevant images, some that crop up in the explicit and sometimes lengthy footnotes, often as absorbing as the text. In one footnote, correspondence by the late Spike Milligan tells us about his efforts to save rock art near Woy Woy, New South Wales, now the Bulgandry figures in Brisbane Waters National Park.

Jon Rhodes probes the puzzle surrounding the red ochre and white pipeclay painting of Bunjil with his dogs (or dog!) in a granite shelter in the Black Range, near Stawell in central western Victoria, now protected from grafitti by a welded mesh cave. Has one dog been added or moved since the cave became known?

Bunjil, the Eaglehawk, a sky-hero of the Kulin, created mountains, rivers and people before he was swept into the sky with his sons in a whirlwind created when Bellin-bellin the Crow opened his sack. Now Bunjil is Altair, principal star in the constellation Aquila. The Wurunjeri gave the names of Bunjil’s sons to the fingers of the left hand.

I became familiar with Australian rock art and the better known rock engravings in the Sydney area through the works of Fred McCarthy in Australian Rock Art (Australian Museum, Sydney 1967) and Peter Stanbury and John Clegg, A Field Guide to Aboriginal Rock Engravings, (Sydney University Press, 1990).

Jon Rhodes examines sites like Bantry Bay, first seen by First Fleet Surgeon John White in April 1788; Gumbooya Reserve, Allambie Heights, once called ‘Flat Rocks’; regrooved images at Bondi Golf Course, and the sad disappearance of more than 80 art works that once covered the rocks at Willara / Point Piper. He reveals that the last remaining carving – a whale or sunfish – from the Point Piper group is now permanently protected under the immovable floorboards of a garage. See ‘Designs made by the Natives’ – my post for May 16, 2018.

Cage of Ghosts was deservedly winner of the 2019 New South Wales Regional and Community History Prize. The judges remarked:

Cage of Ghosts … is a subtle exploration of the way that thousands of years of Indigenous history are both visible, and hidden, in Australian landscapes. It is a formidably documented study with the power to reshape how we see the places where we live. Jon Rhodes evokes a multilayered country whose meanings have been shaped by the ancient cultures of First Nations peoples, but also by the complex, tragic history of settler colonialism.

At 2 p.m on 8 October 1769 a 12-year-old cabin boy named Nicholas Young shouts ‘Land’ from the masthead of HM Bark Endeavour. James Cook names it  ‘Young Nick’s Head’. The English ship has reached the north island of the country named New Zealand in 1642 by the Dutch explorer Abel Tasman, who never attempted a landing.

Next morning the ship sails into an open bay and anchors off the mouth of a small river, the Turanganui, near present Gisborne. Cook goes ashore without Tupaia.

The coxswain fires twice over the heads of ‘natives’ who threaten four ship’s boys guarding a yawl. The third shot kills Te Maro, a Ngāti Oneone leader who is probably making a ceremonial challenge which the Europeans think is an attack.

The native was shot through the heart. He was a middling-sized man, tattowed on one cheek only in spiral lines very regularly formed. He was covered with a fine cloth of a manufacture totally new to us … His hair was also tied in a knot on the top of his head, but with no feather stuck in it. His complexion was brown, but not very dark.

After his experience in the Polynesian islands Cook intends to barter iron goods for food and water. He takes Tupaia and a troop of red coated armed marines with him when he lands the next day.

A hostile group of Maori assemble on the far side of the river, heavily armed with lances, spears and pata (stone clubs). They perform a haka, poking out their tongues in defiance. Tupaia calls out in Tahitian and finds that he is able to understand them, as ship’s surgeon William Monkhouse recounts.

We found they understood his language. A long conversation ensued, which seemd to consist on their part of inquirys whence we came, of complaining that we had killed one of their people, and of many expressions of doubt of our friendship – their pronunciation was very guttural, however Tupia understood them …

One brave Maori swims across the river and greets Cook with a hongi (pressing noses). Soon a crowd around the strangers attempt to snatch their weapons and Joseph Banks wounds a man with small shot when he seizes a ‘hanger’ or short sword from astronomer Charles Green. Te Rakau, a powerful chief of the Rongowhakaata, is killed by a musket ball fired by Surgeon Monkhouse, while others are wounded.

Later that day Endeavour crewmen open fire on a waka (canoe), intending to capture the men on board to gain their friendship. Four Māori are killed during this incident and three youths are captured, taken on the ship, fed and given gifts, but later landed ashore.

In the six months it will take to chart the two islands of Aotearoa, Tupaia becomes a vital interpreter and negotiator between the English and the Maori, who revere him as a tohunga or high priest from their ancestral homeland Hawaiki.

HM Bark Endeavour sails out of the bay on Thursday 12 October. Cook names Tūranganui-a-Kiwa ‘Poverty Bay’ because ‘it afforded no one thing we wanted’.

In two days and 14 hours Cook’s crew have shot and killed six Maori warriors and wounded many more.