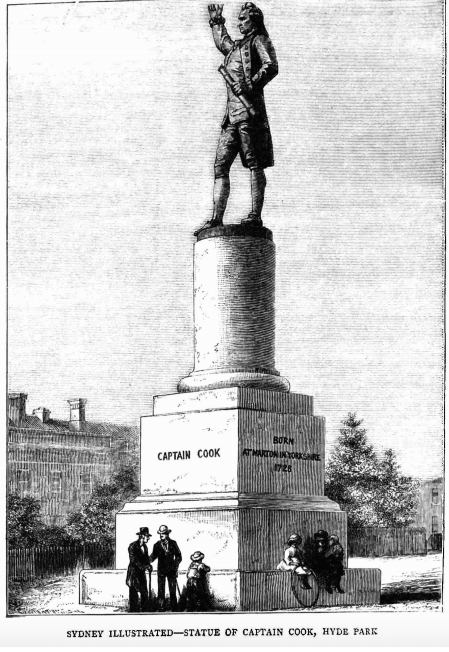 This was the foggy Thursday, 250 years ago, that HM Bark Endeavour, commanded by Lieutenant James Cook, sighted the east coast of the the land the British called New Holland.

The ship left New Zealand on 1 April 1770 and sailed west until they glimpsed the southern point of land at first called Cape Hicks, renamed Point Everard by Commander John Lort Stokes of HMS Beagle in 1843, but today once again recognised as Point Hicks.

In his journal Cook wrote:  “I have named it Point Hicks, because Lieutenant Hicks was the first who discovered this Land.”

Sydney Parkinson, the young Scots artist on board recorded   ” … nothing worthy of note occurred till the 19th, in the morning, and then  we  discovered the land of New Holland.”

An inscription at the back of the bronze statue of Cook by Thomas Woolner in Sydney’s Hyde Park, unveiled in September 1879, reads
“Discovered This Territory, 1770”.

Parkinson recounted the first words spoken to the foreigners by the Indigenous people at Kamay (Botany Bay):
“They threatened us … often crying to us, Warra warra wai”,  meaning ‘begone’ or ‘go away’.

On board the ship were two influential figures: Joseph Banks, the rich amateur botanist and later, Sir Joseph, President of the Royal Society in London and Mario Matra, a British loyalist from North America, both of whom were influential in urging the British Parliament to establish a convict settlement in New South Wales.

The COVID 19 pandemic has closed galleries and libraries throughout the country and caused the postponement or cancellation of several major exhibitions dedicated to James Cook and the arrival of HMB Endeavour at Botany Bay in 1770.

It has shipwrecked the bizarre concept of the “Encounters 2020” celebration, costing $6.7 million, to celebrate the anniversary with the voyage of a replica Endeavour circumnavigating Australian, which James Cook did not make. It was Matthew Flinders (with Bungaree) who first circumnavigated our island continent.

There will be plenty of information about this following the anniversary of the Endeavour’s arrival at Botany Bay on 29 April 2020.

I will not be writing further about it. See my articles on the Electronic British Library Journal:

On this 250th anniversary of James Cook’s landing at Kamay (Botany Bay) Ray Ingrey,  deputy chairperson of La Perouse Local Aboriginal Land Council, has clarified the Dharawal meaning of ‘Warra Warra’, the first words heard by the foreigners as they landed.

He told ABC Radio:
“Warra is a root word for either white or dead in our language  … Over time, because of outsiders trying to tell our story for us, it’s just being translated into different parts as ‘go away’.
“If you are outside our community and trying to look in, you will think it means ‘go away’ but for us it means ‘you’re all dead’,” he said.

See my entry WARRA WARRA WAI for 26 April 2019, which records that  ‘Warra Warra’ was the warning to foreign outsiders at several first encounters throughout Australia:  On the east coast at Botany Bay, and Warang (Sydney Cove) and as far away as the present Oyster Bay in Tasmania and Fremantle in Western Australia.