The language of Port Jackson

One common language united the Indigenous inhabitants of the present Sydney coastal area in 1788 — from the north shore of Botany Bay to Port Jackson (Sydney Harbour) and west to Parramatta.

A travelling Indigenous storyteller came to Sydney Cove in 1793 and ‘held forth to some hundreds of his countrymen’ who presently took him away to a secluded place to hear some more. ‘Their Poets neither have the advantage of writing or printing, are necessitated to travel as the hedge preachers in Britain, to extend their reputation,’ wrote Thomas Watling, the convict artist employed by Surgeon John White, in a letter to his aunt in Dumfries, Scotland.

Watling, with his tongue firmly in his cheek, called the storyteller ‘an itinerant sable Ossian’, comparing him with the fabled Celtic bard.

It is not too hard to imagine this vast audience, so many years ago, watching and listening attentively to the words of the storyteller in much the same way that we would listen to a lecture (or maybe a rock group) or watch a play. ‘Gu-ru-gal’, he probably began, ‘a long time back’, much like our ‘Once upon a time’.

Although they left an eloquent witness to their rich culture in galleries of rock engravings in the sandstone headlands of Port Jackson (Sydney Harbour) and in the Sydney area, the Indigenous Australians did not read or write. Like the songs from their corroborees, the words of this storyteller and other stories of the people who inhabited the place we now call Sydney were never written down.

Like all languages this was expressive, poetic and, often, humorous.Tonga (dunga), to weep or cry, meant literally to howl like a tung-o (dangu) or dingo. Din Tong-e (dyin danga) was ‘a Woman that cries’.  An Aboriginal person might be as angry, goo-la-ra (gulara), as the growling marsupial koolah (gula) or koala. Mínyin gulara eora? – ‘Why are the b.m [black men] angry?’ William Dawes asked his informant Patyegarang in one exchange.

Daniel Southwell noted the similarity between yen-na-da (yanada), an eyelash and yana-da (yanada) the moon. Breakfast Point on the Parramatta River was called Booridow-o-gule, that is Bu-ru-die-ra (burudyira) ‘butterfly’ and gal-lie (gali) from a reference by David Collins to Dar-ra-gal-lie ‘forefinger’ and Ba-roo-gal-lie ‘middle or ring’d’ [finger], i.e. a ‘finger of land’, in other words, the Eora called it Butterfly Point.

On the third page of a vocabulary kept by Governor Arthur Phillip and other officers of the convict colony of New South Wales, Paye wallan ill-la-be (bayi walan yilabi) is translated as ‘Concerning heavy rain’. Paye (bayi) is to beat and wal-lan (walan) is rain, but ill-la-be (yilabi) means to pass water or urinate, so the sentence would translate literally as ‘It beats, it rains, it pisses’, suggesting that the people of Sydney’s past and present would appreciate the identical image of rain ‘pissing down’.

PROVENANCE OF THE SYDNEY LANGUAGE VOCABULARIES

In my Master of Arts thesis EORA CLANS: Indigenous social life in coastal Sydney, 1770-1890 (2004) I traced the provenance –  that is the place of origin and record of ownership of manuscripts and printed vocabularies of what linguist Jakelin Troy called The Sydney Language (AIATSIS, Canberra, 1993).

This information was summarised in my article ‘A few words from William Dawes and George Bass’, published in National Library of Australia News in June 2008, which is reprinted below. 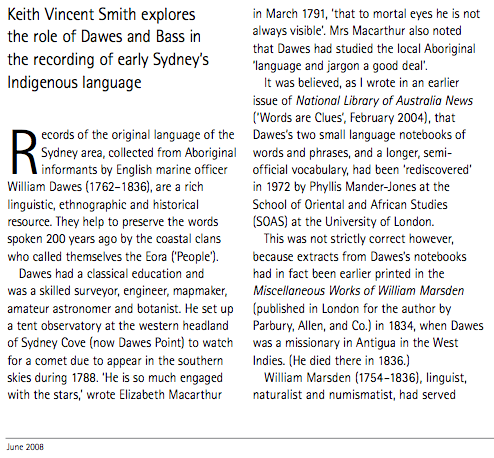 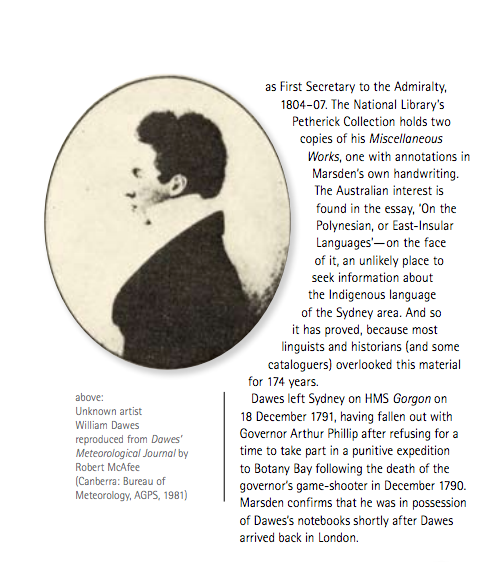 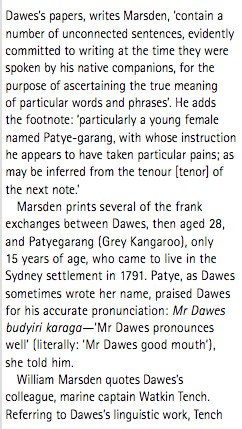 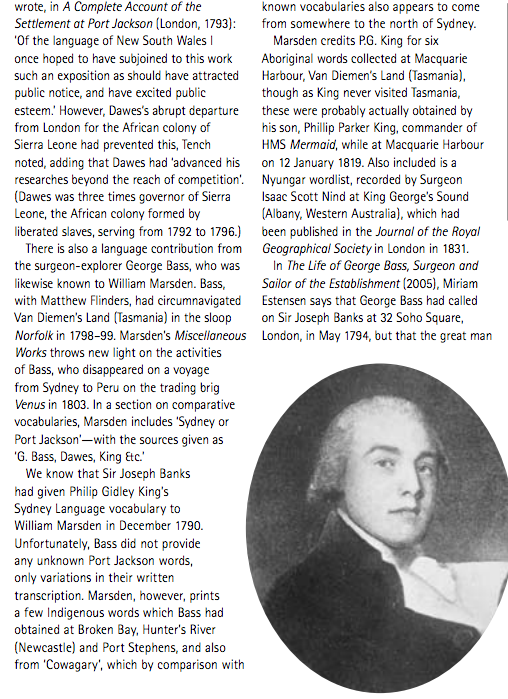 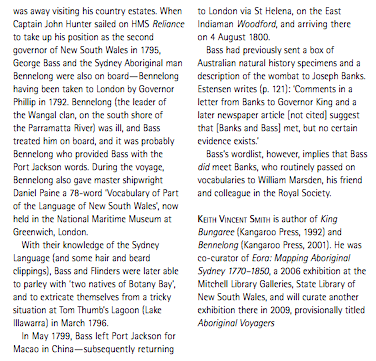 Jeremy Steele’s website is a storehouse of knowledge about Aboriginal Languages. It builds on, explains and explores the ‘Sydney Language’ vocabularies compiled from Aboriginal informants during 1790-91 by Lieutenant William Dawes, the ‘star-gazing’ linguist of the First Fleet who was stationed at Tarra or Darra  (Dawes Point) on Sydney Cove.

Go to ‘Language Resources’ or dalang (tongue) to select your interest from a range of resources. They include the 100 plus Redfern ‘Lingo’ session so far given by Jeremy Steele to classes of mentors and students in the Tribal Warrior ‘Clean slate without prejudice’ programme originated by Redfern Aboriginal community leader Shane Phillips.

No. 56 includes a ‘translation’ of Twinkle Twinkle Little Star into the Sydney Language. Other songs with Sydney Language translation are Kookaburra sits in the old gum tree, The Australian National Anthem, Redfern All Blacks and Once a Jolly Swagman.

The site includes a WordPress blog of language articles compiled since 2005 and gives access to Jeremy Steele’s Master of Arts thesis ‘The Aboriginal Language of Sydney’ submitted to Macquarie University in 2005.

Steele’s Bayala (‘to speak’) databases are drawn from vocabularies mainly from the Sydney area but also from the eastern coast of Australia, Tasmania and Western Australia.

Redfern ‘Lingo’ presentations are held every Friday at 10 a.m. at the National Centre of Aboriginal Excellence (NCIE) in George Street, Redfern. Steele is followed by cultural historian Keith Vincent Smith, who talks about Aboriginal antiquity, archaeology, anthropology, arts and culture.

In this way the original language spoken by Colebee the Gadigal leader and Bennelong the Wangal, go-between and interpreter, is being ‘rescued’, learned and used by a new generation of Aboriginal youth.

Bright-eyed Bennelong is a merry fellow,
happy or furious, drinking tea and touga.
Kotbarabang – ‘he will cut’ – Barangaroo
teases Bennelong as Dawes shaves him.

Benelong gulara ngari Mr. D.
badyul tdara. Ngia tungi.
‘Bennelong was angry with me Mr. D.
when I was sick. I cried.’

Din tong-e – in the language of Port Jackson,
a woman crying like a dangu (dingo);
angry – gulara – as the growling koolah.

This was at Tdara, where Midger Dawes
sleeps by the fire at night with Pateygarang.
Nyimang candle Mr. D. ‘Put out the candle.’

This poem first appeared on Jeremy Steele’s Aboriginal Languages of Australia website. Italicised words are from the Indigenous language of coastal Sydney, as recorded by Marine Lieutenant William Dawes and other First Fleet officers. Tdara or Tarra was Dawes Point.