On the afternoon of 28 April 1770, two Aboriginal warriors stood their ground to defend their Country when Lieutenant James Cook and an armed party of marines from the discovery ship HM Bark Endeavour landed on the south shore of a small, shallow harbour, now called Botany Bay.

They belonged to the Gweagal (‘Fire’) clan at Kundul (Kurnell) on the southeastern coast of the continent of Australia.

The English voyagers made signs that they wanted water, but the two men snatched up their fishing spears and shouted their defiance.

‘Their countenance bespoke displeasure; they threatened us, and discovered hostile intentions, often crying to us, Warra warra wai,’ wrote the young Scots artist Sydney Parkinson (c1745-1771) who accompanied Cook on his first landing.

These words, meaning ‘go away’ or ‘begone’, were the first ever spoken to the English colonists by the Indigenous inhabitants of southeastern Australia. And, it seems, spread widely.

The storeship HMS Supply, with Governor Arthur Phillip on board, went ahead of the convoy of ships that Australians call the ‘First Fleet’ and anchored at Botany Bay on 18 January 1788.

James Callum, surgeon on Supply, described the first meetings with  the Indigenous people to his brother Alexander at East Smithfield, London, in a letter from ‘Port Jackson, Sidney Cove, New South Wales’ on 12 July, 1788.

On the Supply’s entering the Bay, the alarmed Natives ran along the Beach, shouting and hallowing, seizing their wretched Canoes, and carrying them to the Woods,— together with their Fishing-tackle and Children; we brought up pretty close to the North Shore, open to the Sea,—to be seen by the Fleet, which we daily expected.—Seven of them came opposite to the Ship, brandishing their implements of War, such as Spears of an amazing length, armed with Fish-bone, Lances, Clubs, &c. &c. throwing their bodies in threatening Postures, called out in harsh notes, Warraw! Warraw! Warrawi!

Next Morning we proceeded along with the Governor to examine two Rivers, one in a North-west direction, up which we proceeded about six Miles; the other in a South-west; as we advanced up the first, numbers of Natives seemed Fishing in their Canoes, while others were employed dressing them on its Banks; they retired on our approach, Howling and Crying. – Here we first observed them to have Dogs, they are of the Wolf kind, with long shaggy Hair. When they found we passed their Canoes, &c. without injuring them, on our return down the River, they frequently appeared abreast of the Boats, calling out as usual, Warraw! Warraw !

The Reverend Richard Johnson, first chaplain of the colony of New South Wales, wrote to his friend Henry Fricker in Portsmouth on Sunday, 10 February 1788, describing his first meetings with the ‘natives’ on the shores of Botany Bay.
[Safe 1/121 Mitchell Library, State Library of NSW, Sydney]

They came out of the water, joined in a Body together & stood till we came up with them. As we came near them they spoke to us in a loud dissonant Manner, principally uttering these words—“Warra, Warra Wai,” which we judged to be to tell us to go away. When we came up to them, I tied some bits of cloth &c. round their heads and necks & also gave one of them a comb, at which he seemed especially pleased & astonished. Some of them then began to dance, and one of them offered me one of his fishing giggs [a fishing spear], which I refused, the Governor ordering that nothing should be taken from them.

Aboriginal people crowded the high cliffs on 26 January 1788 as the English ships sailed from Botany Bay and dropped anchor in the sheltered harbour at Warang / Sydney Cove, selected by Governor Arthur Phillip because of its trickling stream of fresh water, later called the Tank Stream.

‘The natives on shore hollered Walla Walla Wha or something to that effect, and brandished their spears as if vexed at our approach’, wrote Robert Brown, captain of the storeship Fishburn.

All the natives which were seen when we first arrived at Port Jackson danced violently, shouting ‘woroo woroo, go away’.

On June 23d, at 4 p.m. per log, there was felt the gentle shock of an earthquake, and the appearance of the country warrants an opinion that it has been subject to very severe ones. The King’s birthday was celebrated with great state and solemnity, and large bonfires— we had plenty of wood — were burning all night.
The ships saluted at sunrise, noon, and sunset, which must have frightened the warra warras, for so we call the blacks, from their constant cry of “warra warra” at everything they see that is new.

In a letter to his father from Port Jackson dated 12 July 1788, but referring to 21 January, Midshipman Newton Fowell said of the Indigenous People:

… they speak very Loud and mostly all together very often Pronouncing the Words Worra Worra Wea & seemed quite surprized at not being answered.

The deep, sheltered bay, called Dray.ter by the Indigenous clans of the Paredarerme, was renamed Oyster Bay by Cox.

Mercury Passage, between Maria Island and the Tasmanian coast, takes its name from the ship, then filled with a cargo of 1,000 seal skins obtained at Amsterdam Island (now Île Amsterdam, a French possession), an extinct volcano in the southern Indian Ocean, some 4180 kilometres southwest of Perth, Western Australia.

The story of Cox’s meeting with a group of men and women from the Oyster Bay Tribe (as they were later called) was told by Marine Lieutenant George Mortimer in this extract from his book Observations and Remarks made on a voyage to the north west coast of America, &c, published in London in March 1791. Yes, there it is, at the bottom of page 19 – Indigenous people repeating the words ‘Warra, Warra, Wai’ as they backed away from the strangers. 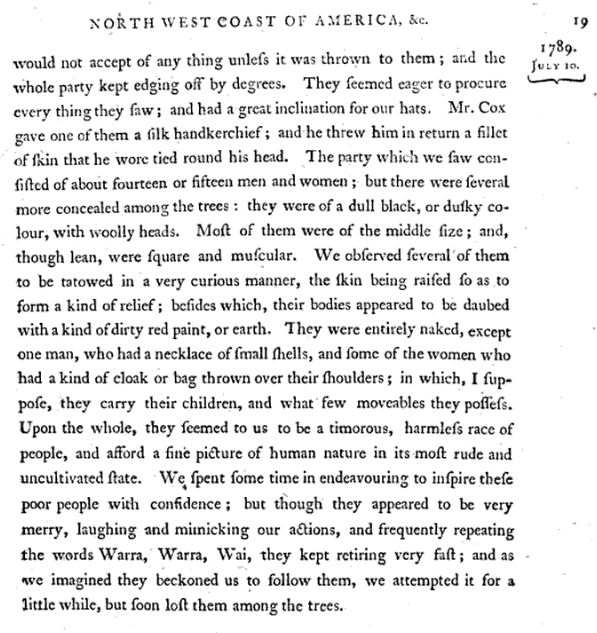 In 1802 Louis Claude de Freycinet, a naval officer and naturalist with the French Baudin expedition, saw and measured the unique water craft illustrated here. These canoes were four metres long and made from bundles of reeds tied with bark cord. The Oyster Bay people, who called them ningher,  used them to cross from the mainland to Maria Island when the sea was calm.

Five or six natives (naturales) can get into these canoes but generally the number is limited to three or four at a time. Their paddles are simple sticks … We saw them crossing the channel only in fine weather … They always place a fire at one end of their canoes, in order to prevent fire from spreading, they place underneath it a sufficiently thick bed of earth or cinders … They use nothing but a kind of reed that grows in abundance at Oyster Bay.

Captain Charles Howe Fremantle and his crew reached the Swan River in southwestern Australia aboard HMS Challenger on 25 April 1829. This was the country of the Noongar.

The ship’s boats set out to explore the river and crossed the sandbar near the entrance. They rowed on further before they saw (and were seen by) Indigenous people on both sides of the river. What did these people call out to them? Fremantle recalled:

[They] halload’d to us very loud and appeared to cry “Warra, Warra,” which I supposed to be “go away”. I took no notice.

Next day after a friendly meeting with a group of Noongar:

We saw a Native with a firebrand in one hand and two spears in the other, shouting Warra Warra and pointing to the shore where the boat was, desiring us to go away.

This time Captain Fremantle decided to go no further. He established a tent camp on the banks of the Swan River and in May there were friendly exchanges with the Noongar, who brought fire, spears, stone knives and some rather sandy fish which they exchanged for the foreigners ‘mutton, tongue, biscuit, and some fish which we had caught.’

In November 1829 the first free settlers arrived in the Parmelia and Fremantle and Perth were established not much later.

Walyalup (Fremantle) was named by the Nungar, perhaps for ‘the place of the Walyo or Woylie’, a tiny kangaroo rat once common in the sandhills there.

Thanks to Jeremy Steele for comments and corrections.
Copyright Keith Vincent Smith 2020